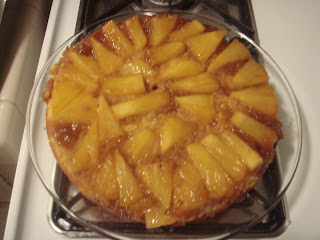 That pretty much sums up everything about this post. I've always been posting recipes that were successful, but usually it involves a lot of trial and error on my part. Here is a recipe for a Pineapple Upside down cake, where I tried to get a bit too creative. The recipe is fine - I just made a mistake.

Mistakes always happen in the kitchen and it's a good thing (once in a while) - you learn something new when it happens and you don't do it again in the future.

I hope you learn from my mistake and don't make it with your cake - that would give me the satisfaction that I need.
So let me break it down: It would have been a resounding success, save for one mistake.

Essentially, the cake involves two straightforward steps:
Step 1: A layer of caramel sauce with pieces of pineapple spread out on top.
Step 2: A cake batter that goes over the caramel and pineapple layer.

It is in the second step that I made the error. I didn't have pineapple juice as suggested in the original recipe, but I had left over pineapple. So I decided to try and squeeze out pineapple juice and use it. The issue is that what you get is more like a pineapple syrup. I thought that it would be fine. But the problem was that because it's thick and syrupy, the batter was too thick and didn't bake well, and even though the tester came out clean - it had that floury taste, which I just hated.

So here's what it looked like: For now, let's pretend that it tasted as good as it looked.

Note: There's a cake layer under the mounds of delicious pineapple and caramel (which was the best part here by the way).

My friends were nice enough to say good things, but I wasn't happy.

Still, I definitely will not make that mistake again (or at least I hope not).

The recipe from Pineapple Upside Down Cake from Smitten Kitchen is still great and I'm stand by it.

I'll be back soon with another recipe (successful this time around!) in the next few days.

Kartik
Posted by Kartik at 4:01 PM