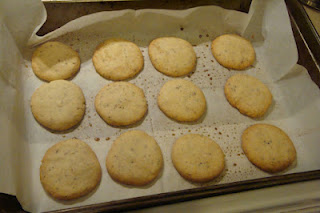 Have you ever had one of those days where you just don't feel like doing anything? Today was that day for me. I got up this morning, looked outside, and decided that I was not planning to do anything but just relax.

Why not? It's always good to unwind. The past few months have been intense - with traveling, interviews, work, and whatever else that was thrown at me (but now forgotten) - and so I deserve this little break.

So I figured, what better way to spend an afternoon than being outside with a cup of ginger chai tea? But, at that moment, I realized that there had to be something along side the tea. Something to dip or nibble on while having a refreshing drink. Hmm....  What do I make?

A year ago, while I was visiting my parents, they showed me this recipe that was originally published in the New York Times - a classic pepper and cumin cookie. Salty but spicy and yet these cookies have a tinge of sweetness. All-in-all, a well-balanced and flavorful cookie. Traditionally a snack to munch on, it's butteriness goes well with each sip of Indian tea.

This is such a ridiculously simple recipe, that I just sped through it without needing to take pictures for each step. In fact, if you look at the original recipe, it's a two-step process, and everything is done in the food processor. It's really not that complicated. You grind the sugar, spices, zest, salt, flour together, and then add the softened butter and vanilla till it forms a dough. Make small balls with the dough and flatten it out in your palm. 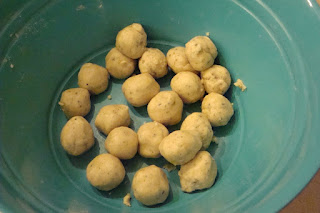 Making little dough balls is fun.
Bake it in a 350 degree oven till it becomes golden brown. Rotate the baking tray halfway to ensure an even browning.

Brown crispy goodness after baking
Just Eat it! (my parody on the Nike slogan)

All right, and now I will go and be lazy in the sunshine.

Kartik
Posted by Kartik at 1:27 PM