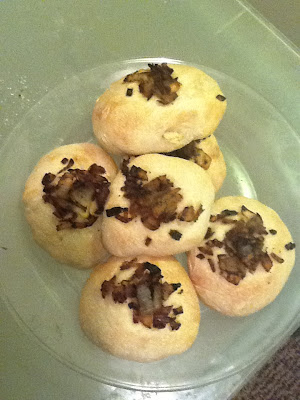 Breakfast is the most important meal of the day. It fills you up and gets you going. It gets you through those really long days that you dread or enjoy depending on how you look at it. It prevents you from yelling at someone when they cut you off while driving without checking their blindspot.

Breakfast has a calming effect. Usually, in the morning, you'll catch me with a bowl of piping hot oatmeal with almond milk, dried cranberries, toasted almonds, and rich cocoa powder. But today....

Today was different. I needed something new. A change of sorts. It had to be a bread. I reach into my freezer for a bread that I made the night before, because it was oh-so-delectable. I couldn't resist.

It was a bialy.

Now you might ask me or look up wikipedia - but what the heck is a bialy? I'm sure you are familiar with the traditional bagel. Well, I consider a bialys to be a close cousin. A traditional Polish roll with stuffing on the top that gives it a heck of a lot more flavor than a plain bagel. No cream cheese needed!

Initially, I was going to follow the recipe in the Culinary Institute book to the letter, but they wanted me to use a special malt syrup that I would have to probably buy online, so I decided to go to the next best resource - Smitten Kitchen.

Luckily, Deb had already made a bialy before and so I used her recipe instead which excluded this malt syrup. In the future, when I have the ingredient, I'll repeat it, but with how successful the dish turned out, I'm chalking this up as a victory.

The dough was shaped into balls after the first rise. 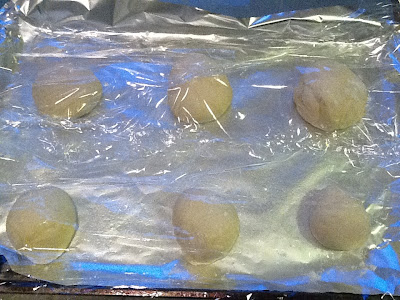 After the second rise, the dough was pinched in the center and filled with the caramelized onion and poppy seed filling before baking it off: 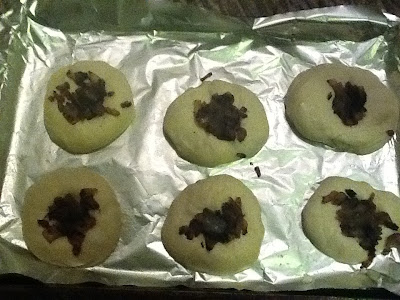 After baking it off:

P.S. That filling is addicting and I suggest you keep a portion for the rolls before eating it all.
Posted by Kartik at 7:42 AM